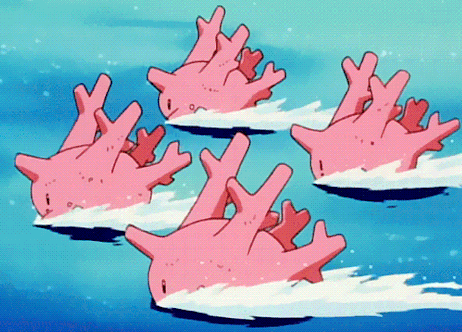 Then if corsola is Region-Locked, what country or continent can it be found in? Well, that's the thing... Like the other Region-Locked Pokemon of the Second Generation, Corsola isn't specific to any given country. At first, many expert trainers believed it exclusive to "Tropic Areas". However, after much more digging and analysis, it seems Corsola's location is based on a given range of Latitude in what is being called the Corsola Strip. This area is found between the Latitude Points between 26S and 31N, which covers (as seen above) all of Mexico, most of Africa, the upper portion of South America, the lower section of Asia, and the upper sector of Australia. Outside of this area, there have been ZERO sightings of corsola whatsoever. And like the other Region-Locked Pokemon, it is very unlikely to find Corsola in eggs outside this Strip, so much so that this method has been recently deemed impossible.

So it appear that if you don't live in these general areas or you don't plan on traveling to such places, it looks like Corsola will be one of your future hopeful trades (if and when Trading becomes available to Pokemon GO).


Comments for Where Is Corsola In Pokemon GO: "The Corsola Strip"