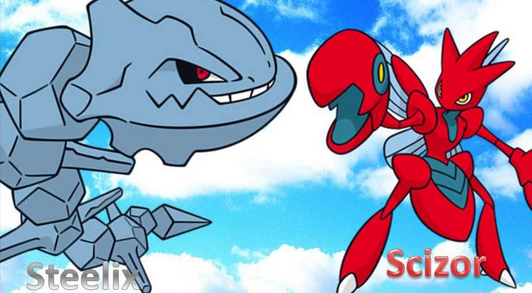 After countless number of pokestop Spins, a player might just get lucky enough to receive a Metal Coat. Unlike most other Evolutionary Items found in Pokemon GO, the Metal Coat can actually help evolve two separate Pokemon: Scyther into Scizor and Onix into Steelix. When this happens, a player will be faced with the tough decision on whether to evolve into Scizor or Steelix first (unless said player gets the extremely lucky draw of obtaining two Metal Coat in one given spin).

But what if a player has enough Candy to evolve into either scizor or steelix? What are they to do then? Obviously, for pokedex purposes, a player will eventually have to evolve into both Pokemon in order to complete their Pokedex. But which Pokemon should they evolve into first if faced with this given dilemma? Again, this decision isn't as serious as others if a player takes a moment to consider which type of Pokemon they are more looking for on their team.

If a player wants a more offensive Pokemon, one that is better suited to Attack Gyms rather than defend them, then a player should definitely choose to evolve into Scizor before Steelix. Scizor has the better Attack between the two, making for greatness when trying to take down a Pokemon Gym, but is very frail against Fire Types when defending. On the contrary, if a player is looking for the better Gym Defender between the two, then they should go with Steelix before Scizor. Steelix has incredibly high defenses, making opponents think twice before trying to take down your Gym. But it lacks in offense, the main reason why Scizor is clearly the better choice in that regard.

As mentioned shortly before, a player will ultimately need both Pokemon in order to complete their pokedex. But since it's hard enough to get your hands on just one Metal Coat, players will often be faced with the choice on whether to evolve into scizor or steelix first. With this information, however, players are now more knowledgeable on which they should choose to do this to. Until then, player will have to keep spinning for those Metal Coats!

Comments for Should I Evolve Into Scizor OR Steelix First In Pokemon GO?